I'd recommend the Museum of the American Revolution in Philadelphia to anyone. Walking away from the exhibit, one realizes just how more complex the events of that era actually were, and the Pennsylvania German community was right in the middle of the tumult with its own undercurrents and complicated factors.

One of the most fascinating aspects of the museum's presentations was related to the Hessian soldiers.  If we're lucky, schools still teach a bit about the role that the Hessian soldiers played on the side of the British in the Revolutionary War. Typically, they are described as "mercenaries," and that appears to have been the common perception of them during the Revolution. The British were fighting for their empire, but the Hessians would fight for anyone who would pay them. This perspective drew out vitriol toward them.


The mercenary angle, however, is only part of the story. While some of the Hessian soldiers were professional military, many of the others were simply serfs. Serfdom was still legal in Hesse-Kassel, so the actual mercenary was their Lord, Landgrave Frederick II, though other German princes also sent serfs to fight in the war. Thus, the Landgrave took in the money from the British and sent the serfs to fight a war in a foreign land. Although serfdom was outlawed in Britain, the military honor code still compelled the Hessian soldiers to fight once they reached the Colonies. The only way out was to desert or to be captured.


Many of these soldiers did not want to be involved in the war, but the nature of serfdom is a lack of choice for the individual and a deference to the Lord. Although in some areas the Colonies appear to have hated the Hessians more than the British, Hessian soldiers' diaries actually reflect some sympathy for the Colonists and a general abhorrence at the British treatment of them, particularly when harsh treatment or execution involved German colonists.

The Battle of Trenton (December 26, 1776, a result of Washington's Crossing of the Delaware River) was a disaster for the Hessians. Approximately 1,000 of them were captured and forced to through the streets of Philadelphia to the derision of the Colonists. Hessian prison camps were set up in various areas, including quite a few in Pennsylvania German areas, where they are said to have been treated well enough that they volunteered to do extra work. After the war ended, many of them opted to stay in the New Republic, and they assimilated with the Pennsylvania German population in the areas in which they had been interred.

Who can blame them? Serfdom was clearly a miserable existence that was only a step away from slavery. The major differences are that, in most areas, serfs could own land and could not be sold. However, in the case of the Hessian serfs, their services were clearly sold and they were impressed into the military, so their rights to individual sovereignty were very restricted.

The ghost of serfdom was indelible on the early Deitsch settlers. It played a role in the first organized protest by against slavery in North America, and it brought moral conundrums to settlers in the Diaspora in the South when they saw the living conditions of slaves.

Many (perhaps most?) of the original settlers had to take an oath of loyalty to the British Crown at arrival, and the Revolution brought to them a dilemma. If they acted upon any sympathy with the Continental Army, they were breaking their oath. Some felt as though the oath was made under duress, since they were already standing in the arriving port and had no way to return home. Anecdotal evidence indicates that many of that arriving generation sat the war out while their children fought for the Continental Army. 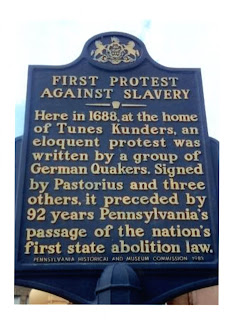 The memories of serfdom, though, stayed with those original settlers who came from lands where they were serfs, and the moral outrage at serfdom and slavery became a part of the Pennsylvania German culture through the Underground Railroad era and the Civil War.

Side note: There are many ghost stories throughout the Deitscherei related to Hessian soldiers. The area around Charming Forge (Berks County) is said to be haunted by the ghosts of many captured soldiers who were put to work there, and even the Headless Horseman of the Legend of Sleepy Hollow is a ghost of a Hessian soldier whose head was blown off by a cannonball.