In this current era in which we have forces trying to tear our country apart based on race, skin color, ethnicity, etc., let us learn some lessons from the past.
Our own ancestors were discriminated against and insulted by one of the most respected Founding Fathers, Benjamin Franklin.

The Palatines were not white enough for Franklin.

The sad thing is that the same rhetoric that Franklin used to insult our ancestors is being used now in Alt-Right marches in DC and Charlottesville. The primary difference is that the Alt-Right has expanded the definition of "white" to include the Deitsch descendants of the Palatines as well as the Irish, the Italians, and the Slavs, all of whom have been the targets of discrimination at earlier points in our history. 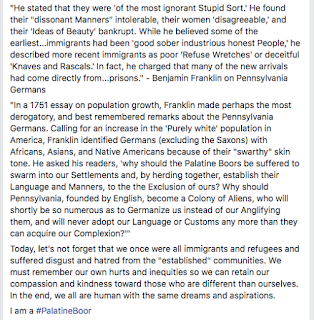 While there are legitimate conversations to be had about legal vs. illegal immigration and a variety of topics within the social sphere, bigotry and racism are not to be tolerated. Our ancestors were the first refugees to these shores from a non-colonial land. The Deitsch were the first to protest slavery in the Americas. The settlers lived in general peace with the Lenape, and there is lore within Braucherei of exchanges of information about plant medicine.

The Palatines - and the present-day identity of the Deitsch - have always had their own way of viewing and doing things even within the context of being leaders in the pursuit of the ideals that are spelled out in our Constitution. Our cultural expressions and practices continue to this day despite  20th century efforts to undermine them and to suppress them.

Even while celebrating what makes us unique, let us embrace the wider diversity of this country with the recognition that we are all building toward those ideals.

In that spirit, we proudly adopt the hashtag of #PalatineBoor and its Deitsch equivalent, #PelsicherRauhbautz* as recognition that we are the descendants of the people whom Franklin eschewed. May we be more generous to later arrivals than he was to our ancestors.

----------------------------------------
* The Deitsch cognate of the English word "boor" is "Bauer" and is also cognate with the Dutch and Afrikaans word, "Boer." However, in regular Deitsch usage, the word "Bauer" has come to mean simply "farmer" without a semantic of class that would render it as "peasant." A "Rauhbautz" carries the semantic meaning of "boor" that reflects the unrefined aspect that people who would use a word like "boor" would intend. Quite literally, a "Rauhbautz" is an "unrefined (raw) bugaboo."